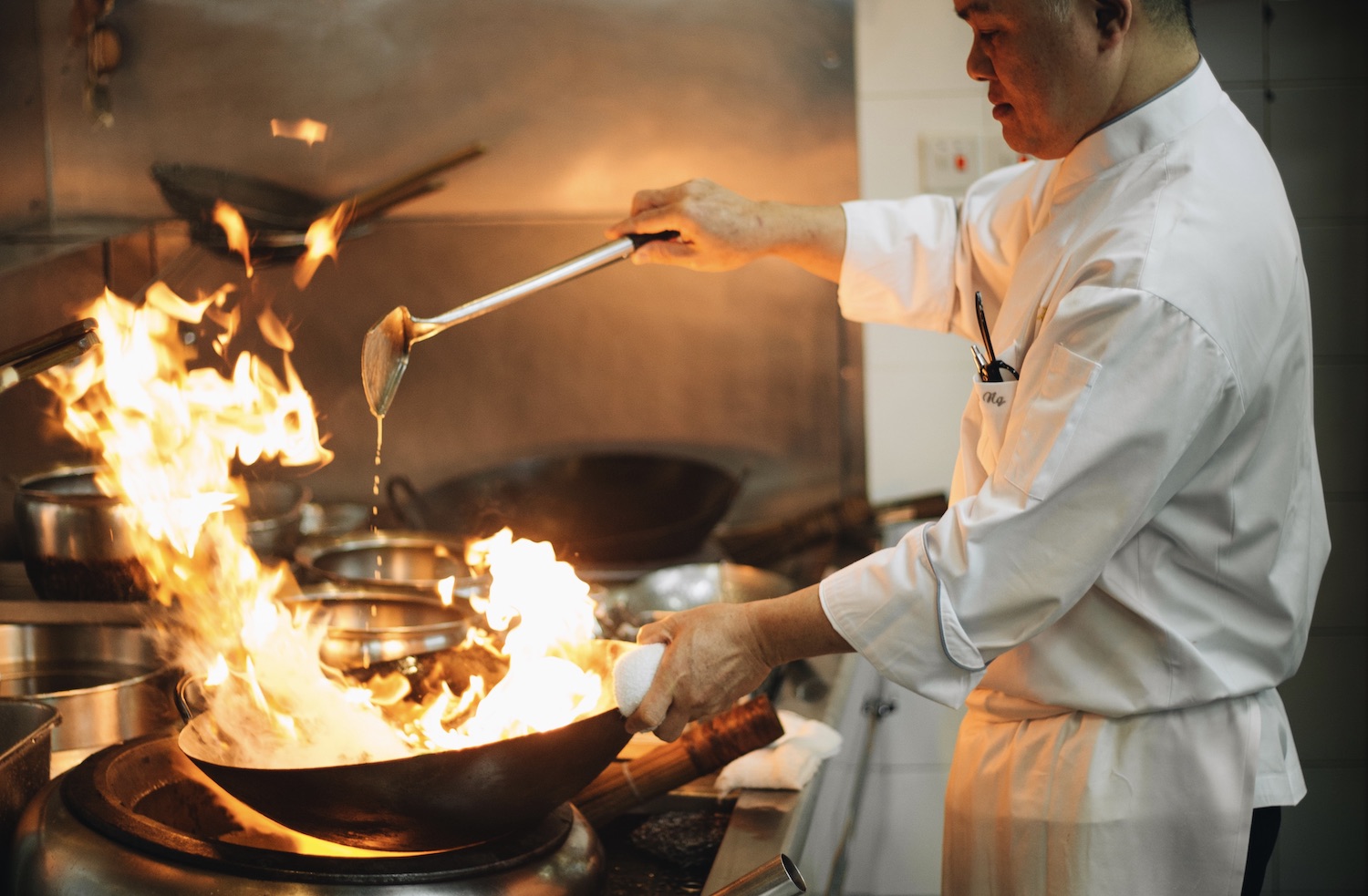 It takes a chef a long time to master the art of ‘WOK HEI’ IN CHINESE COOKING. Can you achieve it at home?

‘THE BREATH OF THE WOK’ or ‘wok hei’ in Cantonese refers to the smoky char nuances in both aroma and flavour that envelops a just-cooked stirfried dish. Hor fun (flat rice noodles with meat and gravy), fried rice, sambal kang kong, and many stirfried dishes MUST have wok hei if it to have a stamp of approval with foodies.

Walk past any zichar homestyle Chinese eatery or Chinese gourmet kitchen and you’ll hear the roar of jet flames. This is how searing hot, huge and powerful the fire has to be for the cook to work his wok, and to cloak his ‘dancing’ food with wok hei. It takes seconds to achieve but it takes years and years of learning and practise.

The smoky aromas from food that are captured with wok hei evoke sensations to the mind that the food is done by a highly skilled chef who is able to balance the high heat with the nice caramelising of natural sugars as the ingredients get cooked in the intense high temperatures.

First a high powered gas stove is needed before anything else can help. The strength of a stove is measured in British Thermal Units (btu). A domestic home stove is only about 20,000btu. To achieve wok hei, we need at least a 100,000btu stove. This is not allowed in domestic kitchens in apartments and public housing flats because of the danger, heat and smoke it generates from cooking at such high temperatures. Wok hei is achieved when moisture released from food or sauce ingredients tossed in the wok over high fire, splatters with droplets of rendered or added fat in the wok. The splattering of minute oil droplets in air together with the tossing action at high temperatures ignites the fat to burn up when the combustible temperature is reached. The resulting flames from fat burning droplets produces smoke which is captured or infused into the food ingredients in the constant tossing action. The resulting smoky aroma and top notes found on the surface of the food ingredients that we bite into is known as wok hei.

Wok hei is a complex spectrum of smoke produced from burning fat and caramelising natural sugars from meat, vegetables and seafood in the high temperatures of cooking. It adds a smoky dimension to the dish. While complex, it is pleasantly subtle to both nasal and palate sensations of the diner. It is not the same as aromas produced from food that is too charred or burnt with intensive unpleasant bitter smoky aromas and taste.

WHAT TYPE OF WOK DO YOU PREFER TO USE?

I prefer carbon steel. It is light weight, non reactive to acidic ingredients and sauces. It is also easier to manage when it comes to wok tossing the ingredients to produce flames.

A simple Teochew style chye por  kway teow fried with lard, preserved radish (chye por), kailan and seasoned with fish sauce. The simple ingredients based dish relies heavily on wok hei to lift it up to an appetising aroma.

The food has to be tossed about non-stop and moved about vigorously in the wok over the strong flame during those few seconds.

Wok hei is particularly important in Chinese cuisine for the robust flavour, texture and fragrance of the food.

To achieve wok hei, the two key things to note are – high fire and quick, repeated toss of the food in the wok. Approximately 20 seconds before the food is done cooking, you have to raise the flame temperature to extraordinarily high levels.

Then, the food has to be tossed about non-stop and moved about vigorously in the wok over the strong flame during those few seconds. Sometimes, this is done in combination with tossing the food in the air by flicking the wok.

The regular use of the wok develops a layer of hardened oil that prevents the food from sticking to the wok.

Wok hei is the intense smoky flavour of food that can only be achieved under extreme heat. The food is tossed about in the wok, and the wok should be heated up gradually to extreme temperatures, after which the oil and gravy are added into the wok. The oil ensures that the gravy does not burn as the other ingredients are added to the wok. It is more than just heating up the food – you have to make sure that the smoky fragrance permeates the food in its entirety to achieve wok hei.

Wok Hei gives food that smoky fragrance that is considered the mark/skillset of many Cantonese chef’s cooking. The intense flavour is achieved through special control – an art which takes chefs years to perfect.

HOW DO YOU TAKE CARE OF YOUR WOK?

Like all tools of the trade, woks also have a certain lifespan. In order to maintain the curvature of the wok, as it will eventually go out of shape due to the heavy usage, one needs to heat the wok at an intense heat to invoke the malleability of the metal. This is seen when the wok turns red with the heat of the fire. The chef will then hit the wok with a special wooden “hammer” of sorts to bend it back to its original shape. This is something that I do to ensure that my wok is taken care of.

Get all your ingredients ready by the stove.

The fire must be strong and you must be quick in your cooking. If not, the dish will be overly smoky.

It makes the dish aromatic and taste better.

HOW TO TAKE CARE OF YOUR WOK?

You must clean it after every use and protect it with a thin film of oil.

That would be then dried beef hor fun.

In addition to the chef’s technique, the material of the wok matters too.

The temperature of the wok has to be perfect. However, this also depends on the chef’s experience to control the fire with just the right amount of temperature and heat to spread evenly through the wok. In addition to the chef’s technique, the material of the wok matters too.

Flavour, taste and fragrance of the breath of the wok.

HOW TO TAKE CARE OF YOUR WOK?

Season the wok with oil. Traditionally, chefs will always burn the bottom of the wok to maintain it and also achieve a better effect of wok hei. These steps will usually make the wok thinner, such that the wok heats up fast enough to quick fry and create the wok hei.

Wok fried beef kway teow, dry version. It looks simple, but if the wok hei is not executed well, this dish will not be fantastic.

I bought this cast iron wok for about S$14, and I can see it lasting me a life time. It’s heavy to toss and flip food around in but cast iron develops its own barbecue flavours after a while. Before using it for the first time, I had to get rid of the ash-like black film it naturally has, and make it safe for food. A Chinese chef recommended this method:

To season a cast iron wok

Wash your wok thoroughly with soap and water. Dry. Dry fry a handful of Chinese tea leaves, moving it all over the surface of the wok. Add water to the tea leaves, to totally fill the wok, and bring to gentle boil. Switch off the heat, and leave the wok with the tea water in it for one day. The next day discard the tea water, wipe dry and repeat the process. Test by cooking some rice or vegetable discards with a little oil to see if there is any black residue on the food. If clear, you’re good to go. Do not use detergent to wash your wok after cooking but brush gently with a coconut husk brush and water. Dry it, drizzle a little cooking oil in it and coat the oil all over the wok to prevent rusting. After cooking with your cast iron wok for some time, it becomes non-stick and develops its own natural delicious barbecue char flavours.

How to achieve wok hei at home

As chef Eric Low mentioned, it is illegal in most homes to have a powerful stove that blasts frightening flames needed for successful Chinese wok cooking. With a little creativity, you can cheat by adding smoky flavours with these techniques and items.

1 Flambe – If you do not want the liquor to affect the flavours of the food, vodka is the most neutral of spirits that leaves no flavour. The initial flame may be huge but don’t fret, it vanishes in no time.

2 Mezcal – This Mexican agave spirit has a unique, distinctive smoky flavour. This is because the harvested agave fruit is smoked in pits before extraction and distillation. Add a teaspoonful to your stirfry or flambe with it. It is expensive like tequila but a little goes a long way (unless you knock back shots every night).

3 Smoked salt – Sea salt is smoked with aromatic woods for a delicious hint of char. The best way to use smoked salt is to sprinkle a little during cooking and after you’ve cooked your food. This way, the smoky flavour will not be lost in the other seasonings and ingredients.

4 Liquid smoke – Available in little bottles at many supermarkets, liquid smoke is a water-soluble liquid that imparts a woody smoky aroma and fragrance to food especially meat. It is generally made by condensing the smoke from burning wood. Just a dash will do (1/4 teaspoon) as it is highly concentrated. You can dilute it in stock or water before stirfrying.

5 Charcoal – Light a piece of charcoal on your gas burner till it smokes and put it into a small heat proof bowl. Make a small well in the stirfried food you have just cooked in the wok. Place this bowl into the well around your food and cover the whole wok with foil for a few minutes.

6 Lapsang Souchong tea leaves – This Chinese tea is dried using pinewood fire, and has a wonderful smoky essence. In a separate pan, dry fry a handful of these tea leaves till it smokes, wrap in tin foil and poke holes. Place this little packet into the well around your food in your wok and cover the whole thing for a few minutes. You can also brew the tea and use it as stock.

7 Chef’s blow torch – Invest in one of these handy kitchen gadgets that throws flame onto foods for searing char and wok hei aromas. I’ve seen chefs blacken salmon, melt butter and direct blow torch flames into a wok if the stove is not that powerful.

8 Dark roast coffee – The darker the roast the more delicious the char flavour you will get. Dark roast coffee includes espresso, Italian, Sumatra Mandheling, French and Columbian. Just a pinch of ground coffee will give you a shot of smoke. Or turn it into a popular wok dish: coffee pork ribs.