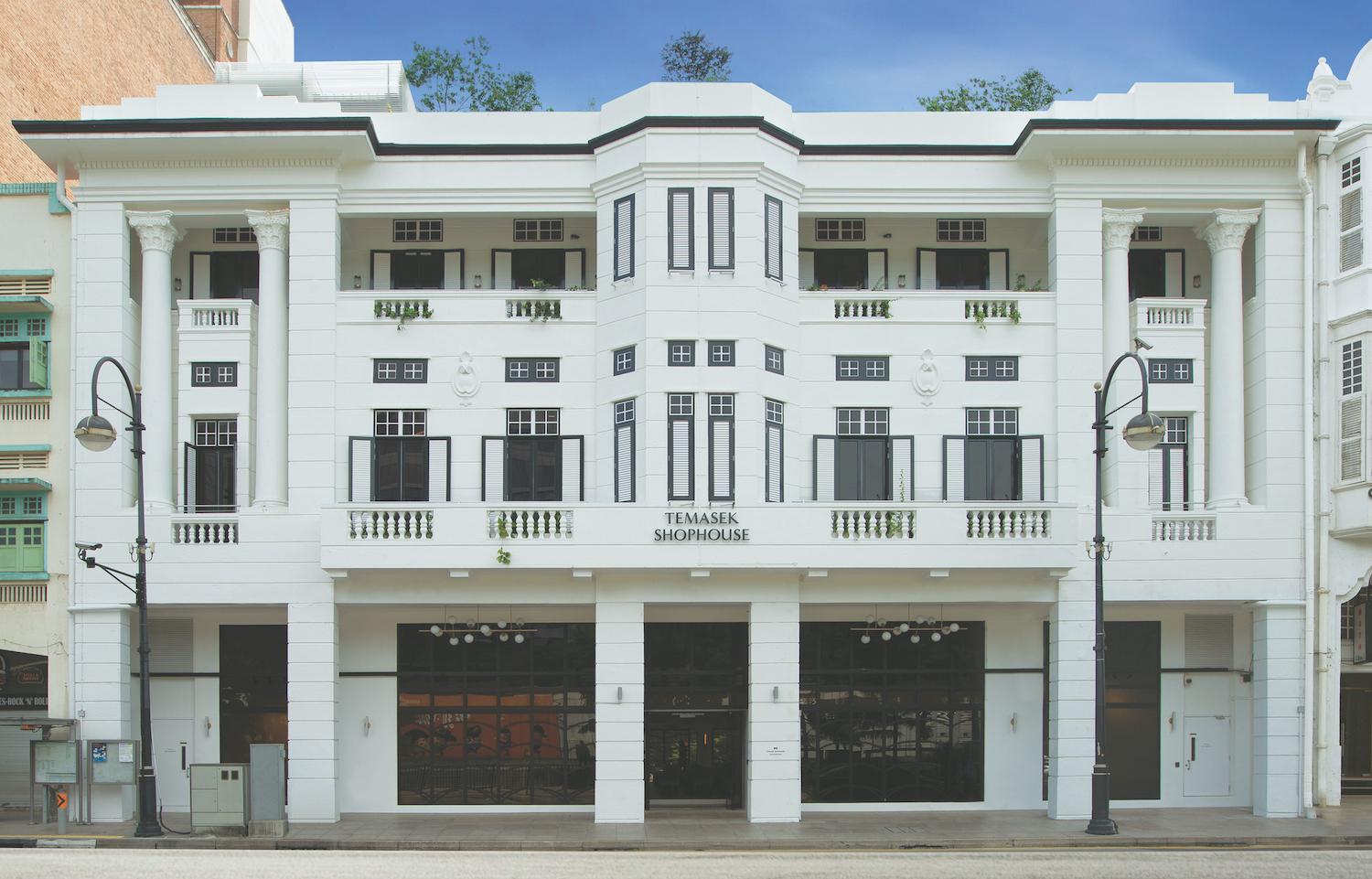 IN TONES OF BLACK AND WHITE the three-storey Temasek Shophouse sits next to MacDonald House on Orchard Road. The facade is a mix of Neoclassical and Edwardian architectural styles. At the back a Garden Entrance leads to a symmetrical face flanked by streamlined wings and spiral staircases. The building is occupied by Singapore government investment company Temasek as a hub for its social enterprises. It used to be a townhouse with retail and residential units.

The building was the winner of the Urban Redevelopment Authority’s (URA) award for restoration, deserving the recognition for bringing back to life its original elements and features, and echoing the original form as close as possible.

Led by Surbana Jurong with Asylum coordinating the interior design, and Greenology taking care of landscaping, the 18-month restoration of the 835-sqm site was to preserve the unique appearances and long history of the shophouse, while selecting sustainable materials.

Built in 1928 as part of post-war development plans for Orchard Road, the building was gazetted for conservation in 2000 for its rich and diverse architectural styles, ranging from ornate and decorative classical features to a modern art deco style. It was unoccupied for nine years in a sad state of disrepair, and the challenge was to restore the original character of the shophouse that had two distinct Neoclassical and Edwardian architectural signatures on the facade.

Its renovation is inspired by conservation and biophilic design. Biophilic design, or designing with nature, increases biodiversity within a small footprint, and mimics a habitat within a rainforest in the tropics. More than 100 different local species of plants and trees were planted during the refurbishment of the building.

Asylum’s design concept of the interiors of Temasek Shophouse is influenced by the art deco architectural style of the building, and by Singapore’s nature. Curated art pieces and a collection of furniture made from recycling waste materials can be found in selected spaces to reflect Temasek Shophouse’s values and beliefs.

As you enter the building, you are greeted with an open atrium with its lush green wall that brings you closer to nature. The atrium’s streamlined aesthetics channels an art deco-inspired light feature that suspends above as a distinct centrepiece.

Pockets of green and natural light are introduced on every level including washrooms as a bright colour palette complements the nature within the space. Meeting rooms are named after native bird species including bulbul, dove, flameback, heron, kingfisher, koel, redshank sunbird, swallow, sparrow, starling and hornbill.